The government has elaborated into details about the recently launched national agricultural program II and said that, it has some strategies aimed at providing training to farmers in the country so as to make them produce more food as well as cash crops to be used in local industries. In the program more priority areas will be given to farmers who are dependent on cash crop production in order to promote their livelihood and the industrialization agenda program which the government has adopted for middle income economy. 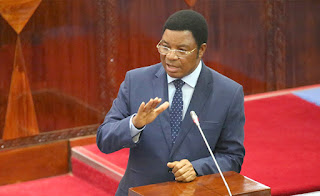 The Prime Minister Kassim Majaliwa said last week in parliament when responding to an impromptu question which was earlier raised and directed to him by Rashid Ali Abdallah (CUF) during morning session. The legislator wanted to know plans by the government in its move to transform the agricultural sector so as to reduce poverty stricken situation among farmers in the country. Responding to this, the PM noted that, as the government is aware of the fact that, about 75 percent of its populace is consisting of farmers living in rural areas, it has targeted to empower farmers by giving them training that would make them become knowledgeable on various farming techniques.
Posted by Emmanuel Onyango at 10:34 PM