The Minister for Finance and Economic Planning Dr. Phillip Mpango read the national budget for 2018/19 financial year in Parliament House in Dodoma city last week and in his introductory statement, the finance minister has hailed the fifth phase government led by Dr. John Magufuli. This is the third budget to be read by the fifth phase since it came into power 2015. He said that, during his short term tenure, the president has done a commendable job for the nation in its efforts to control and defend the national properties for the benefits of the nation at large. In its expression, the minister noted that, the President has offered free education program from Primary to ordinary secondary schools in the country whereby the government spends Tshs. 6.8 bn/- on monthly basis. 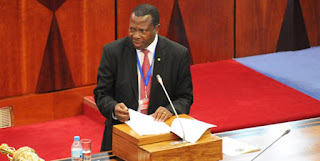 He also noted that, the President has increased the health budget from Tshs. 31 bn/- to Tshs. 269 bn/- and has shown his courage over the fight against graft in the country and has saved over Tshs. 864 bn/- On projects, the President has initiated modern construction of the Standard Railway Gauge (SGR), Stigler Gorge project for electricity and other road construction projects which are going on in various parts in the country. On Air transport, Mr. President has bought a number of airplanes which will  ne operating on Tanzanian airspace and even outside the country. The nation has bought 3 planes which carries 76 passengers and t3 other Boeing planes which carries 262 passengers as well as one Bombardier which carries 132 passengers and these would be jetted in the country next year. The finance minister also noted that, during President’s short tenure in the office, he has managed to build a court which will listen to various cases related with economic sabotage, and has also managed to remove ghost workers and saved Tshs. 13.5 bn/- per month.
Posted by Emmanuel Onyango at 10:20 PM