Prersident John Magufuli was on Monday this week elected Chairman of the ruling party CCM with an overwhelming 100 percent votes cast, and at once asked leaders within the executive arm of his government to respect the party and continue implementing its manifesto. Speaking immediately after he was declared party chairman by interim chairman and former president, Benjamin Mkapa, Dr Magufuli asked all leaders to remain loyal to their party, pledging to work with fellow elected leaders to ensure that the party moved forward. Dr Magufuli who was elected by the party’s general congress garnered all the 1,821 vote cast, without ‘spoiling’ a single cast. “I want to see all leaders regardless of their positions respecting the CCM leaders … they should also remember that it’s this party which employs them,” he stressed. Dr. Magufuli was equally categorical that he would continue working for all Tanzanians, exuding confidence that CCM will continue garnering victory in future elections. He further called for cooperation from other political parties, thanking the opposition party leaders who attended the CCM meeting. According to him, their presence at the meeting was a sign of political maturity. 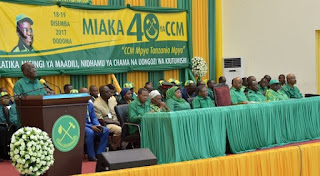 President John Magufuli congratulating CCM members after having elected him their chairman. 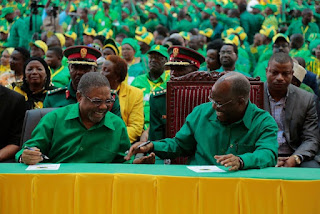 The elected CCM Chairman and Tanzania's President John Magufuli in a light moment with party's Vice-Chairman and Zanzibar President Dr. Mohamed Shein during the election process which was held at party's headquarter in Dodoma, the country's designated capital city.

Meanwhile the Zanzibar President Dr Mohamed Shein and Philip Mangula have been elected by NEC as party's Vice Chairmen for Isles and Mainland respectively after having received 1826 votes each. The elected top CCM brass will lead the ruling party until 2022.

Permits for elephant hunting reduced to save the species

The government has adopted new ways of preventing wanton killings of elephant species in Tanzania by increasing issuing permits for their hunting. Thanks to the government and since the permits to allow such killings has been reduced, then if someone feels like going for hunting expedition, then should he or she try other species because in efforts to save jumbos, the Tanzania Wildlife Management Authority (TAWA) has reduced the number of elephant hunting permits issued per year. “We are issuing only 100 elephant hunting licences per year,” said Ms Nyangabo Violet Musika, the Officerin- Charge at Tanzania Wildlife Management Authority (TAWA), during a media briefing session in Arusha, adding that the annual hunting season in the country runs between July and December. A recently released wildlife census report indicated that there are 43,521 elephants in Tanzania, but as it seems 70,000 had been lost over the past six years, prompting TAWA to initiate spirited control measures. The Officer-in-charge explained further that, TAWA which manages all game reserves in the country currently totalling 18, collected 80 per cent of wildlife-related revenues from hunting concessions and 20 per cent of earnings are generated from photographic safaris. “But 65 per cent of all earnings are sent back to the local villages surrounding game reserves. 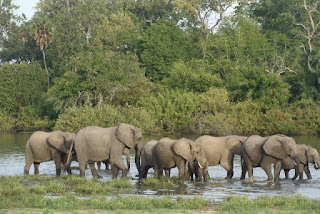 TAWA gets only 20 per cent while the remaining 15 per cent is channelled into district council coffers,” she explained, pointing out that the government has ensured that local residents got the lion’s share of earnings raised from wildlife-related products. Reports indicate that Tanzania had around 110,000 jumbos by 2009, placing the country in the second position after Botswana, which by then had close to 150,000 elephants. However, the number of trumpeting jumbos in Tanzania drastically dropped from over 100,000 five years ago to the current 45,000 average, indicating a loss of more than 60 per cent in the animals’ population. About two years ago, the Tanzania Wildlife Research Institute (TAWIRI), in conjunction with the Frankfurt Zoological Society (FZS), conducted a special wildlife census targeting jumbos. The ‘Great Elephant Census’ covered all of Tanzania’s key elephant eco-systems as part of the initiative funded by Paul G. Allen to assess the current state of elephant populations across the African continent. The Malagarasi-Muyovozi eco-system recorded the highest jumbo disappearance at 81 per cent, followed by Ruaha- Rungwa at 76 per cent and Selous-Mikumi with 66 per cent loss.

Female students in higher learning institutions to be encouraged


Higher learning institutions in Tanzania have been urged to take the initiative of encouraging female students to boost their career opportunities. This was said on Monday this week in Dar es Salaam by the Deputy Minister of Industries, Trade and Investment, Engineer Stella Manyanya during an award presentation event at the Dar es Salaam Institute of Technology (DIT) where she was the guest of honour. She said that with Tanzania striving to become an industrialised country, deliberate efforts should be put in place by higher learning institutions in the country to encourage more female students studying science and technology. “Countries which invest in science and technology have witnessed drastic strides towards development, and therefore Tanzania should not be left behind in the course, and female students can play a pivotal role towards this,” she said. Alumni of DIT herself, Eng Manyanya said that Tanzania has made great efforts in making sure they achieve a 50/50 ratio in various areas, saying that this can be achieved if more effort is put in encouraging women in their development endeavours. She urged the graduating students to spend more time looking for ways of advancing the country’s industrial drive, saying that every year farmers watch as their fruits rot away because there is no fruit processing plants in most parts of the country, telling them to take advantage of the situation. The DIT Principal, Professor Preksedis Ndomba said that the institution is positioned to respond to the call by President John Magufuli to spearhead realisation of industrial economy by 2025, as spelt out in his inaugural speech to the Parliament of Tanzania on 20th November, 2015. He said that DIT understands that such a mission could only be realised if local technical training institutions will significantly increase students’ enrollment and improve teaching


The Arusha Regional Referral Hospital  in northern Tanzania is faced with a shortage of beds, forcing patients to share a bed. Arusha Regional Chief Medical Officer, Dr Timothy Wonanji said on Monday this week that in total they are in need of 161 beds. Dr Wonanji said this when he was receiving 40 beds and mattresses from Exim Bank Arusha Branch as part of celebrating 20 years since the bank was introduced in the country. He said the support has come at an opportune moment as the Mount Meru Hospital is going through trying times, asking other stakeholders to follow Exim’s example. Dr Wonanji said that maternity ward is the mostly affected in the hospital as many call for delivery and that it is common for two mums sharing a single bed, something he said was not healthy as it could lead to infections.

The medical expert further said that Mount Meru Hospital is in need of 500 beds if they are to assign one patient per bed, saying that after Exim’s support the shortage remains at 161 beds. He said the beds delivered would be used at the maternity wards. He thanked the Exim Bank management for the support and asked them to initiate a campaign against non-communicable diseases, saying they were becoming a huge threat as days unfold. Exim Bank Arusha Branch Head of Trade and Marketing, Mr Stanley Kafu said that in their 20 years anniversary they will issue 500 beds and mattresses to public hospitals in 13 regions in the country. Mr Kafu said the equipment cost more than 200m/- and the bank has used the sum from little profit they accrue so as to give back to the community and steer development activities.
Posted by Emmanuel Onyango at 10:11 PM 1 comment: