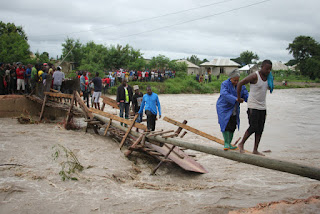 Ilala district Commissioner Ms. Sofia Mjema is being propped up by a person while crossing a rafter at Gongo La Mboto Ulungoni suburb yesterday when he visited a place which is among that have been wrecked havoc by rains in the city of Dar es Salaam.

Posted by Emmanuel Onyango at 5:42 AM No comments: 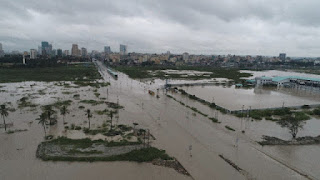 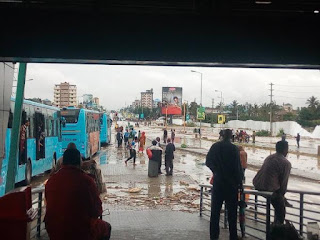 The Uda Rapid Transit (Udart) has suspended services to and from the City Centre due to the closure of a section of the Morogoro Road in Dar es Salaam. The head of communications at Udart, Mr Deus Buganywa, said in a statement that the company reached a decision to temporarily suspend services to and from the City Centre as the Morogoro Road was closed at Jangwani area due to flooding. The Tanzania Meteorological Agency (TMA) said on Friday that Dar es Salaam, Tanga, Coast, Morogoro, Lindi, Mtwara, Unguja and Pemba would receive heavy rainfall throughout the weekend.
Posted by Emmanuel Onyango at 5:38 AM No comments: 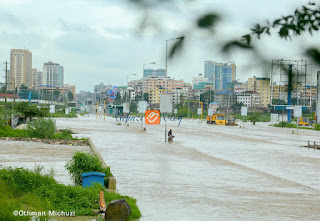 Tanzania’s Meteorology Agency (TMA) has said heavy rains are expected to persist over Tanga, Dar es Salaam, Pwani, Morogoro, Lindi and Mtwara regions together with Unguja and Pemba isles. According to a statement published on the TMA website on Friday, April 13, the weather conditions will remain the same until today. This is due to enhancement of convection associated with the rain belt. 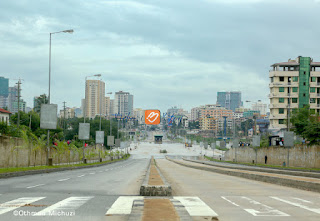 TMA says most of the mentioned areas are already receiving a lot of precipitation and additional rain is likely to result in hazards. "Residents of the mentioned areas are advised to take appropriate precautions and continue to obtain and adhere to weather information as well as warnings," read the statement, adding that the agency would continue to monitor the situation and issue updates whenever necessary.
Posted by Emmanuel Onyango at 5:34 AM No comments:

Tanzania meets 52 per cent of the actual demand for healthcare workers, Parliament has been told. The revelation was made in Parliament on Friday, April 13, by deputy minister for Health, Community Development, Gender, Elderly and Children, Dr Faustine Ndugulile, when responding to a supplementary question from Shinyanga Special Seats Member of Parliament (MP) Azza Hamad. In her question, Ms Hamad wanted to know when Shinyanga Regional Hospital would be provided with specialist doctors. 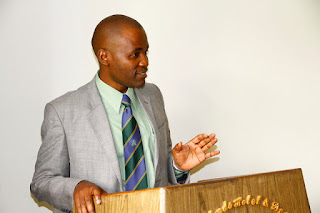 In his response, Dr Ndugulile said the government was aware of the shortage of practitioners in the health sector, as so far the country only meets 52 per cent of the actual demand, adding that the statistics are the most recent after a countrywide evaluation. "Already, we have secured the employment permit during which referral, regional and district hospitals including the Shinyanga Regional Hospital will be provided with the new healthcare workers including specialist doctors," he said. Responding to the main question, Dr Ndungulile said regional hospitals required specialist doctors in the areas of the maternal mouth and teeth, radiology, surgery and child healthcare.
Posted by Emmanuel Onyango at 5:31 AM No comments:

Dangote set to use natural gas 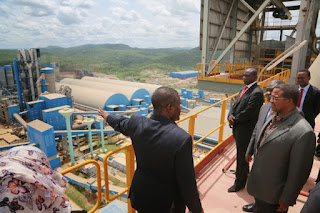 Dangote Cement plant in Mtwara will start using natural gas in its production by the end of next month, The Citizen has learnt. The development creates hope that production at the country's largest cement producer will not be affected by electricity challenges, resulting in a number of benefits to consumers such as reduced prices. The move follows the completion of infrastructure, complete with installation of a natural gas pipeline from Block Valve Station one (BVS 1), a 132 metre distance to the cement factory. A source at the cement factory told The Citizen that currently, the company is transforming its systems from diesel to natural gas consumption. "We are currently switching off our diesel systems and installing those that will use of natural gas. I am certain that once we start using natural gas as source of power, we will save a lot in production costs," he said, preferring anonimity since he is not the official spokesperson of the company. According to him, the factory is now forced to use six million litres of diesel per month at a total cost of about Sh10 billion. "With natural gas, our operational costs will go down and ultimately, the price of cement will also be reduced," he said. This would obviously be good news to Tanzanians who have experienced a rise in cement prices during the past three months. 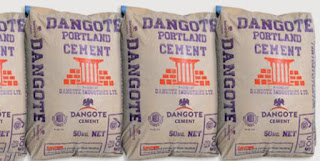 Currently, a 50 Kilogram bag of cement retails at a minimum of Sh13,000 in Dar es Salaam, up from around Sh11,500 four months ago. The Public Relations officer at Tanzania Petroleum Development Corporation (TPDC) confirmed to The Citizen on Wednesday that the installation of the pipeline to the plant has been completed since in mid-September last year. "TPDC has completed its phase one mission of connecting the industry with natural gas for electricity generation...it is now the task of the firm to change its operational systems and utilize gas," he said. According to him, Phase One of the project was funded by Dangote Cement at a total cost of $915, 953.59 (about Sh2 billion on the prevailing exchange rate). In another development, TPDC is now implementing the second phase worth $3.75 million including tax that will see another natural gas pipeline being installed at the cement plant for heating and production activities.

Posted by Emmanuel Onyango at 5:25 AM No comments:

Butiku is against rude political parties

The  Mwalimu Nyerere Foundation executive director Joseph Butiku has underscored the importance of having political parties that respect humanity and democracy and allow people to take part fully in the national development process. He decried dirty politics, insisting that multiparty democracy was not intended to bring hostility and divisions among the citizens. He was speaking on Friday, April 13, during the commemoration of Mwalimu Julius Nyerere's birthday. Mwalimu Nyerere was born on April 13, 1922 in Butiama, Mara, in the then British colony of Tanganyika. He died on October 14, 1999 in London. 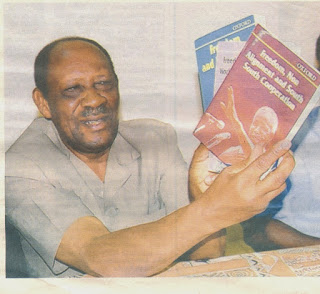 
The commemoration took place at the Mwalimu Nyerere Memorial University in Kigamboni. The theme of his presentation was 'Towards the middle economy: the Father of the Nation's contribution in building peace, national unity and accountability'. Mr Butiku said in 1992 Mwalimu Nyerere persuaded CCM to switch to pluralism but not to court political hostilities. "Therefore, we want political parties that respect humanity, democracy and participation of the people. We want political parties that will strength peace and unity bearing in mind that our foundation is equality for all." He said Mwalimu Nyerere was humble and died poor, receiving a take home pay of Sh4,000 a month. "However, he raised his family like other families and he left a widow who is full of wisdom," he said.
Posted by Emmanuel Onyango at 5:23 AM No comments: