Between June 16th and 23rd June 2011, Tanzania government through President’s Office Public Service Management organized an exhibition as part of the awareness to the general public which intends to show various public activities the government and its agencies deals with. This week long celebrations is an annual occasion which goes alongside with various entertainments activities including traditional dances being performed by various invited groups. There were some other countries through their diplomatic offices accredited in Tanzania such as Republic of Kenya and Zimbabwe also were invited to attend and showcase their government’s activities. It was really a fascinating event at Mnazi Mmoja Municipal ground as the festivity inhaled the minds of the passersby around. Unlike in other countries, show goers do pay their money to view such exhibitions. But in Tanzania things are different as nobody pays money and the entrance is free to everybody. I managed to attend the occasion as I passed along and took some few photos for remembrance to the occasion and which I would like to share with you in this blog. 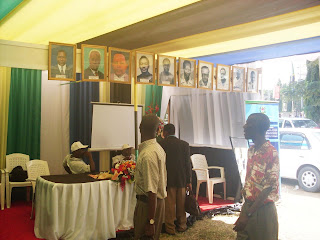 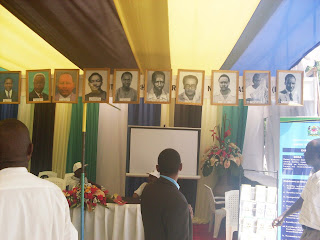 This is the Prime Minister’s Office that had lined up the photos of the Prime Ministers of the government since independence. As you can see from the right photo extreme right was Mwalimu Julius Kambarage Nyerere who became the first Prime Minister and later the first President of the United Republic of Tanzania.
Posted by Emmanuel Onyango at 6:30 AM 1 comment: 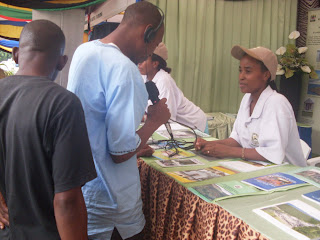 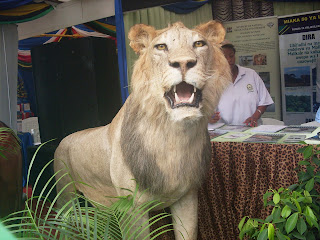 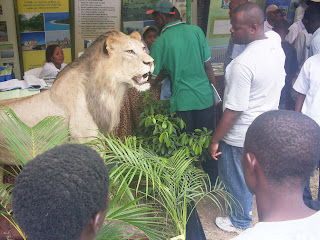 This is the Ministry of Natural Resources and Tourism, a lady is being interviewed by the Television journalist of the Mlimani TV station. The pavilion was decorated by a staffed lioness sculpture which attracted most show goers.
Posted by Emmanuel Onyango at 6:27 AM No comments:

How the Germans were ruthless to Africans 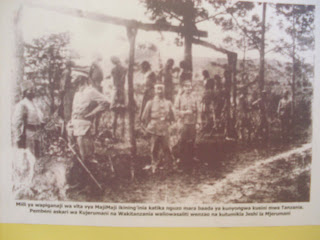 This photo really caused a negative perception of the people’s mindset an aspect that brought sorrow, horror and may be panic that might have amounted to many show goers after having looked at it. The history tells us that, the Germans hanged many traditional African leaders who resisted them from ruling our country during the colonialization process in Africa in late 19th century. But most of us are just mere readers of these legend stories and quite a substantial number of most readers couldn’t ever believe these facts. The truth was shown during the Public Service Management exhibition when the Tanzania’s National Service camp displayed an original photograph which was taken from German. The photo depicts four German ruthless soldiers standing in front of the dead African soldiers whom they had just hanged and their bodies left to hang over the ropes after having been found guilty of causing a strong resistance to their rule. This incident took place just at the end of the Maji Maji war in 1907. The war reminds us of the strong African resistance to colonial invasion of our land in southern part of Tanzania. It was very sad at the scene indeed as most people who looked at this photo almost cried as they remember the pangs of humiliations their forefathers suffered during colonial times. Probably the photo might have shocked a strong wave to would be relatives of the victims.
Posted by Emmanuel Onyango at 6:21 AM No comments:

A state house function that looks so indecent 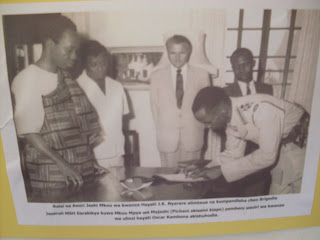 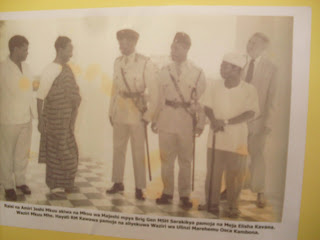 This photo reminds Tanzanians of the day when President Julius Nyerere had appointed the first National army commander of the independent Tanganyika state. This was when the country had just formed its own armed forces and called it Tanzania People’s Defense Forces (TPDF) The force was established three years after the independence following the army mutiny which took place in early 1964. The first army commander was Major General Mirisho Sarakikya (Who has just bent down), the incident took place at the State House in Dar es Salaam. On the President’s left is the Minister for Defense by then, the late Oscar Kambona. He died in 1997 while President Nyerere passed away in October 1999.
Posted by Emmanuel Onyango at 6:19 AM No comments: 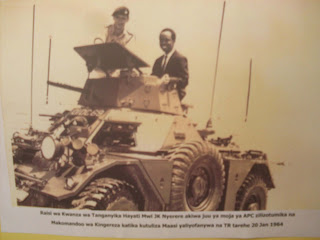 President Nyerere on a ride over a British military tank driven by its commando which had just arrived from England aboard a military plane which landed at the Dar es Salaam International Airport at night during the army mutiny in 1964. I didn’t even know that it’s the British government who came to restore peace and order in the country when the army went on a strike in 1964. They were invited immediately to curb the rioting soldiers at the invitation of the British High Commissioner in the country who was requested by a letter which was written by the then Prime Minister Mzee Rashid Kawawa.
Posted by Emmanuel Onyango at 6:17 AM 2 comments:

Mnazi Mmoja ground, a most fascinating ground for public functions 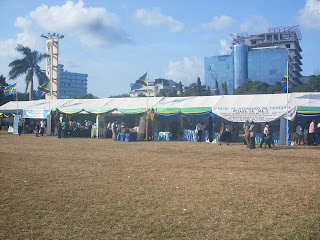 The Mnazi Mmoja ground has become the principal place whereby all the public functions are held. The ground is owned the Ilala Municipal and was inaugurated in late 1998 by the then Dar es Salaam City Commission led by Charles Keenja.
Posted by Emmanuel Onyango at 6:14 AM No comments: 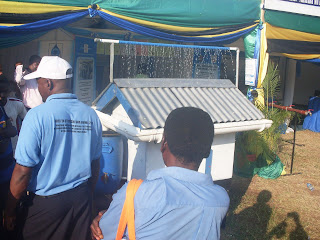 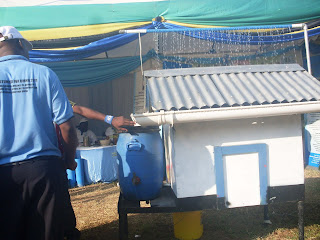 Whenever there is a public exhibition people are normally advised by the government to attend as they might receive an information which was not within their comprehension. Among the activities that impressed the show goers recently during a week long Public Service Management exhibition was when an expert of the rainwater technology enlightened the people on the best use of the rain water harvesting technology and its importance for the modern life. This was at the exhibition pavilion owned by the state agency that deals with water drilling and construction of dams in the country.
Posted by Emmanuel Onyango at 6:12 AM 2 comments:

Exotic cattle breeding, is it useful for a normal farmer? 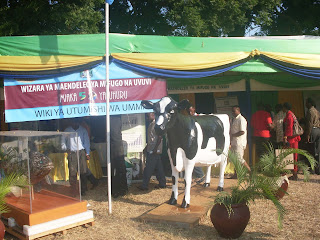 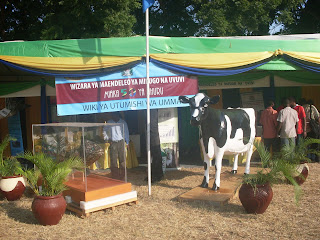 The Ministry of Livestock Development and Fishing were not behind to enlighten the general public on the proper cattle breeding, but it’s very unfortunate to see that, despite of their strengthened efforts, the ministry has totally failed to make life better to rural farmers in terms of cattle keeping. The Ministry has to depend on almost everything from the donors to help its people.
Posted by Emmanuel Onyango at 6:09 AM No comments: 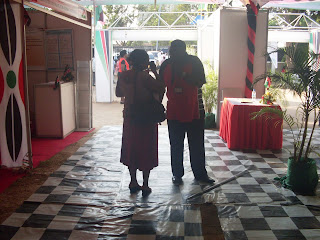 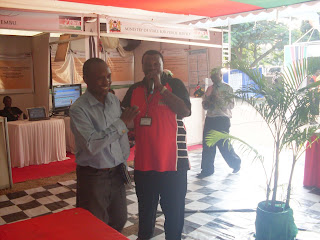 A famous Kenyan radio broadcaster, Mr. Leonard Mambo Mbotela was the Master of Ceremony at the Kenyan pavilion during the exhibition. Many Tanzanians who had never come into contact with him, had a chance to approach him for talks. Mbotela is a very well-known radio presenter and a broadcaster especially in his program known as “Je huu ni Ungwana?” which literary means “Is it really fair?” a program mostly aired in Swahili language at Kenya Broadcasting Corporation (KBC)
Posted by Emmanuel Onyango at 6:07 AM No comments: 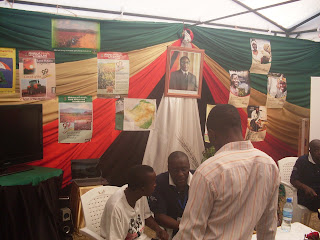 A Zimbabwean attendant giving information to a show goer at the Zimbabwean pavilion on various activities the government of Zimbabwe is doing during the Public Service Management exhibition
Posted by Emmanuel Onyango at 6:04 AM No comments: 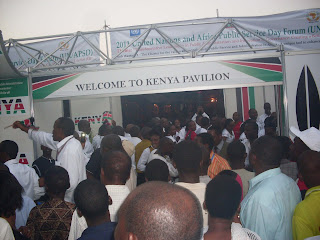 This is how people thronged at Kenyan pavilion who scored the first position of the foreign category during the Public Service Management exhibition in Dar es Salaam recently. The pavilion attracted most Tanzanians who in one way or another were very fascinated to know much about what their neighbour Kenyans performs their government’s duties.
Posted by Emmanuel Onyango at 5:59 AM No comments:

A Ministry announced the first winner 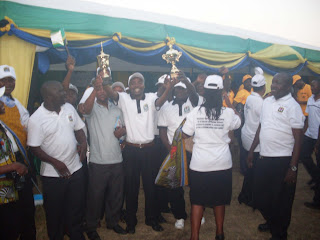 A jubilant workers of the Tanzanian Ministry workers whose ministry was announced the first winners on one of the categories. The y can be seen with their trophy celebrating in high motion.
Posted by Emmanuel Onyango at 5:56 AM No comments: