Hectares of land already set aside for youth’s economic development

NEWS FROM THE PARLIAMENT:

The government has already set aside a total of 404,000 hectares of land in 48 district councils in the country to be utilized by youths in various economic activities for their development as a way of empowering them. The deputy minister of State in Prime Minister’s Office responsible for Labour, policy, parliamentary affairs, Youths, Employment and disability Anthony Mavunde said early this week in parliament during question and answer session. The deputy minister was responding o a question earlier raised by Bukoba rural lawmaker Jasson Rweikiza (CCM) who wanted to know when the government will form camps for youths on which to engage in their various economic activities. 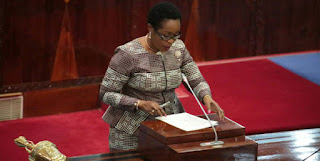 In responding the question, the minister rectified the legislator’s statement and noted that, there are no camps except there are groups for empowerment which have been formed in various district councils which enables youths to borrow loans with ease in order to conduct their economic activities. The minister has also directed all district councils’ authorities to continue sensitizing youths into joining these groups in their respective jurisdictions so as to enable them receive loans as much as they could to cater for their economic gain. Contributing to the issue of youths and their groups for empowering them, the deputy minister for agriculture Marry Mwajelwa said that her ministry has also the program of empowering youths in small scale agricultural activities.
Posted by Emmanuel Onyango at 12:50 AM