The government has said that, it has come up with new strategic measures which would ensure the production of cotton cash crop which currently is being produced with 300,000 kg per hectare of land to 600,000 kgs with the start of 2018/19 fiscal year. The deputy minister for agriculture Dr. Mary Mwanjelwa has said yesterday in parliament that, the government is in plan to increase cotton selling stations a move that would encourage many farmers into devoting themselves in cotton growing. 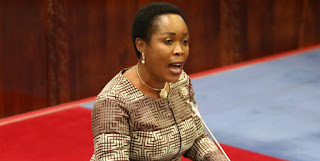 She also noted that, there will be prompt payments to be made to farmers who takes their produce to cooperative unions for sale, unlike before farmers are desperate when are borrowed and paid later a move that discouraged many from growing zones. The deputy minister was responding to the question which was earlier raised by Itilima legislator Njalu Daudi Silanga (CCM) who wanted to know strategies put in place by the government in order to save cotton growing in the country. The minister further noted that, the government in collaboration with stakeholders in the ministry has put in place to do many research activities of the plant so that with the industrialization program going on in the country, industrialists would benefit as cotton has a variety of use for industrial processing. As the crop takes more time to mature, hence farmers should also be enlightened on the basic use of good agricultural practices in order t increase productivity.
Posted by Emmanuel Onyango at 10:12 PM