Govt to overlook at education colleges in the country

The government is undertaking intensive preparations by way of renovating dilapidated buildings of the education colleges located all over the country, the deputy minister of State in President’s office responsible for local government and local government George Kakunda has said. Kakunda said in the Parliament when he was responding a question earlier raised by Kilwa South legislator Selemani Said Bungara (CUF) who wanted to know plans by the government of renovating dilapidated buildings owned by college of education in Kilwa. 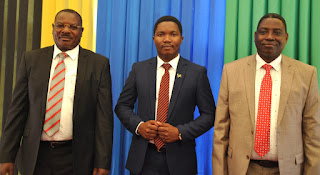 George Kakunda standing extreme right, in the middle is the Minister in-charge Selemani Jafo while on the left is deputy minister in the same ministry Josephat Kandege

The deputy minister noted that, as the government knows the importance of education colleges in the country and other equipment installed in the college, therefore in view of this, it has set aside money fir the purpose of renovating all buildings seen to be in bad shape. He said that, the government is taking preventive steps as an initiative steps to curb with any further damages likely to be caused by any natural means. He said that, the government is also planning to provide a vehicle to all colleges which do not have vehicles to mobilize their day to day activities. A supplementary question was raised later by Temeke legislator Abdalah Mtoea (CUF) who wanted to know the fate of students who finished their training at Temeke based Bandari College and unfortunately haven’t yet been given their certificates upon their completion since 2015. Responding to the question, the deputy minister noted that, the government was working on the issue and that once such certificates would be ready will be distributed to respective candidates.
Posted by Emmanuel Onyango at 10:30 PM