No extra treatment of diabetic mellitus by local herbs


A special seat legislator Suzan Lyimo (Chadema) has decided to reveal in public her long illness saying that, she is suffering from diabetic mellitus. She had raised a supplementary question with a view to know from the government side if there are medical experts with extra treatment on the disease. She told parliamentarians that, she had been hearing that there are medical experts who advertise themselves that are able to cure the diseases and wanted to hear what the government is saying about their claims. Responding to the question, the Deputy Minister of Health, Community development, Gender, Elderly and Children Dr. Faustine Ndugulile said that up to now, there is no local cure of the disease up to now which has been proved to be active. The deputy minister has called upon all registered medical experts if they think have correct cure should follow the right channels as laid down rules and regulations instead of advertising themselves. He said through the right channels is together with their herbal medicines to be researched well and later be given registration by the authorities concerned so as to please the government. 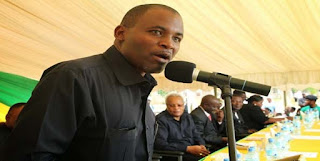 On Kidney victims, the deputy minister said that, about 240 patients have been operated at the Muhimbili National Hospital (MNH). The deputy minister was responding to the supplementary question which was raised by a special seat legislator Farhia Shomari (CCM) who wanted to know how many patients who suffers kidney complications have been attended by the MNH. The minister noted that, in 2011 when the kidney treatments were introduced, there were 10 patients and now their number has shot up to 240 patients. He said at the moment, the kidney clinic at MNH receives an average of 60 patients per day and those attended for purification of kidneys are 80 per day. He said up to now about 10 patients have been given other kidneys at the hospital and according to him, the government is planning to give kidneys to at least five patients at the hospital every month. However, he noted that his ministry will continue working in close collaboration with other stakeholders to educate people so that they may know to protect themselves from being attacked by the kidney disease.
Posted by Emmanuel Onyango at 5:50 AM