NEWS FROM THE PARLIAMENT:

The government has assured to complete once and for all shortages of health workers facing a number of health centres in the country, the deputy minister of State in President’s office fir local government ad regional administration Josephat Kandege has said. The minister said yesterday in Parliament when responding to the question earlier raised by Iramba East legislator Allkain Joseph Kiula (CCM). The legislator wanted to know when the government will bring health workers for the newly Mkalama health centre which the government had built in his constituency a year ago. 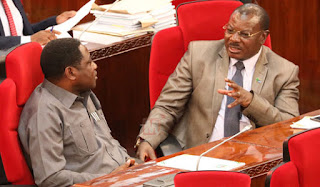 Josephat Kandege (right)  in disciussion with his counterpart George Kakunda. (left), the two are deputy ministers who serves in the same portfolio in President's Office.


He said that, with then good efforts shown by the government towards ensuring the provision of clean health facility in his constituency, the  health centre lacks enough personnel an aspect that, there has been a backlog of duties while serving people. In response, the deputy minister assured him that, among the 2,534 health person el to be employed during 2018/19 financial year, the centre will also be provided with 12 workers. The deputy minister has also promised the Singida North legislator Monko Justine (CCM for the Migori health center, and another legislator Almasi Maige (CCM) for Uyui in Tabora, and Ndanda legislator Cecilia Mwambe (CCM) for Chiwale health centre.  The minster assured them that, health centers in their constituencies would be provided with enough personnel to run the activities. Earlier the legislators forwarded their claims of the incurring shortages of staff facing their health centres during question and answer session in parliament. Responding to this, deputy minister Kandege said that, out of these staff to be employed soon, some will be directly employed by the local government ministry, while others will be channeled through minister of Health.
Posted by Emmanuel Onyango at 9:58 PM