The government has issued a directive to police force in the country saying that, there is no permission to apprehend innocent civilians in place of the hard core criminals whom they have suspected to have committed a crime on the alleged scene. The directives were issued last week by the Minister of Home Affairs Dr. Mwigulu Nchemba when responding to a supplementary question which was raised by special seat legislator Devota Minja (Chadema). The legislator wanted to know from the home affairs ministry why is it that, some police officers have a tendency of apprehending innocent civilians from the scene of incident once they see to have missed the real suspected criminal. The legislator elaborated more and noted that, the police gets stranded once they miss a suspected criminal from the scene and command their wives or children in place and take them to police station for interrogation as though are criminals. Responding to this question, Home Affairs minister said that as the police perform their duties in accordance with the laid down laws and regulations, under the scenarios, there is no permission whatsoever to work on contrary to the assigned laws except have the obligation of looking for the real offenders. 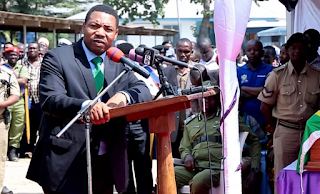 “The police should look for the real offenders as it is not wise for someone to be subjected for torture for the mistakes alleged to have been committed by another person, this is not accepted”, said the minister. He further noted that, the suspected criminal should be held responsible and if he or she is not found, the police must use their queer intelligence actions in order to get rid of them and not otherwise. The minister’s responses has come hardly one week ago when the local media reported that, a woman aged 29 years in Kilombero district was mistakenly apprehended by the police and taken to police station when the police missed her  husband who was alleged to have bought a stolen bed in the district. In a mysterious condition contrary to humanitarian grounds, a woman who was about to give birth to a baby started to cry for labor pain while locked inside a police cell and was later on taken out, and no sooner had she given birth outside the police station than she had arrived to hospital for delivery. The action has caused a serious debate among the public domain as inhuman act although the police had confessed that it had formed a probing committee to investigate the matter and would release the outcome of their findings soon.
Posted by Emmanuel Onyango at 10:09 PM