The government has directed authorities from districts and the Municipal councils in the country to revoke title deeds of the forest land whose owners have failed to develop them according to Land Act. The Minister for Lands, Housing and Human Settlements William Lukuvi issued a directive t last week in parliament when answering a question during question and answer session. He said that people who own land must develop them for their benefits and the nation and should not leave their land stay idle for unknown reasons, failure to take charge and comply by the description stated on their valid documents must have their title deeds revoked.  The Minister was responding to the question which was raised by the Special Seat legislator Devota Mathew Minja (Chadema ) who wanted to know the number of land title deeds has the government revoked so far ever since it embarked on the program of settling land disputes in various places in the country. 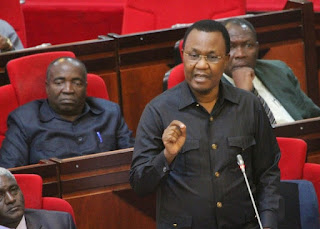 William Lukuvi gestures as he make a point in Parliament

The minister noted that, he could not remember the number of the already revoked title deeds as they are so many bearing in mind the fact that Tanzania has a vast land and the government would not allow  land speculators any more. The Minister further noted that, the government would continue to impose stringent conditions and take necessary legal action against land owners who have defied complying by the conditions imposed in their title deeds. He said the government is undertaking such stringent measures after having found that most people including investors who had been given land for development have violated their use and the government would not hesitate to discipline them. He therefore stressed the need to make use of the land issued to people with the title deeds to be utilized in accordance with the purpose for which the land documents are issued. The Minister had also noted on his notice to district and municipal authorities that they should give 90 days notice to the defaulters before putting into action such stringent measures, and that the revoked title deeds should be given to other needy people.
Posted by Emmanuel Onyango at 4:53 AM