THE Permanent Secretary in the Ministry of Information, Youth, Culture and Sports, Seith Kamuhanda has refuted claims raised by the Tanzania Editors Forum (TEF) who criticized top officials of his ministry who failed to turn up during the three days’ meeting of Media Council of Tanzania (MCT) with editors which was held in Morogoro this week. The PS made the call recently in Dar es Salaam when he spoke to journalists in response to a statement by TEF which was issued and published by some newspapers. The statement had criticized the government through the ministry of Information for having skipped the MCT conference it had organized for TEF. The PS is shocked by the TEF’s claims published in newspapers, and he has however dismissed some of the incriminating news reports which he says are not true especially when they said that, ‘their snubbing of the meeting was an indication that both the minister and the PS will not cooperate in making the proposed information law”. The PS said that, there is no grudge between him and his newly appointed minister cautioning that the TEF must know this. Flashing back his reputation, he said that the minister was among the workers who had been working with him in the same ministry before her new appointment. “I am surprised to hear that we have clashes, and wonder as to why such a well-known national journalists’ forum can ever say” he said and added that, he is not in a position to demand for an apology as doing this is a mere creation of enmity and further troubles. The PS is professionally is a journalist noted that he had been into the media ever since when he started working as a junior reporter and finally became a top Managing Editor of the government owned newspapers. In view of this, therefore he is not happy with this dramatic remark he has experienced as a PS and in spite of this, he prefers to remain calm noting that there was no need to quarrel when there is no reason, though he is worried and astonished by what was published. D 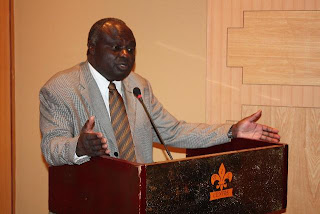 escribing the reasons why he didn’t turn up in the meeting as per the demand by TEF, the PS noted that, he had already notified the MCT’s Executive Director Kajubi Mukajanga upon receiving the invitation and noted that, his ministry was engaged in an important meeting with the Parliamentary Accounts Committee for which he was required to attend. “The reasons that led to my abseitism to attend the meeting was crucial one for I couldn’t have dared to leave an important Parliamentary Committee meeting” he said adding that, he was sure that he had sent an excuse to the MCT boss some days before their meeting in Morogoro who was aware of this. He said that the MCT’s invitation was sent to the Minister Dr. Fenella Mukaranga requesting her to be the guest of honour and because of the tight schedules, she couldn’t confirm quickly and instead she delegated the offer to me which coincidentally the day had collided with the parliamentary committee meeting an aspect that he couldn’t also dodge. “I respect the minister as my boss and that I do not think there is anything wrong among us that can be a cause of the total failure as far as our performance is concerned” he said adding that, he wonders as to why such a media forum can dare to utter such things without clarification. Earlier the TEF had expressed their disappointment and wrote a press statement after the top ministry officials failed to travel to Morogoro to officially open the MCT’s first consultative annual general meeting. The meeting brought together Managing Editors from the country’s media houses to discuss issues pertaining to the media industry. The TEF’s statement which it had sent to the media made it open that it would officially submit their claims on the conduct of the ministry’s official to President Jakaya Kikwete as reported in the Citizen English daily newspaper dated on 8th June 2012.
Posted by Emmanuel Onyango at 1:23 AM