A Member of Parliament from Zanzibar has thrown blame to the media for the general coverage about the recent clashes caused in the Isles by a Zanzibar Islamic Revival Forum, popularly known as ‘Uamusho’ the group accused of masterminding chaos in Unguja last month. Mbarouk Mohammed told the budget session in Parliament recently in early hours of questions and answers that, the media propagated the whole story mainly by concentrating on the churches which had been touched and claimed to have ignored the coverage of other buildings and individual properties. He said the coverage on the issue by both print and electronic media for unfair, and added that reporters failed to analyze the whole incident in a properly balanced manner. However, he himself couldn’t specify properly if there were further damages cause that could need coverage. Earlier the MP had asked a question which was directed to the Prime Minister Mizengo Pinda when he wanted to know about actions so far taken by the government against the ‘Uamusho’ groups, whereupon the PM said that, the government is currently investigating the matter. The Premier further noted that, the government is suspecting there might be the involvement of some government officials who might have colluded with the group directly or indirectly that drove their motives into such extremes and incited them into causing violence and such chaos to the people around. He said, once the government’s investigations are complete, stern measures would be taken against the culprits. The PM made the call and assured the peace loving people in the country to be calm while the government is in the move to find a permanent solution. 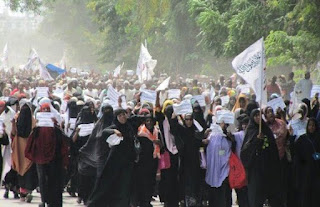 Members of UAMSHO group during their illegal demonstration recently in Zanzibar.

Speaking for the disturbing group in the Isles, President Jakaya Kikwete recently assured Tanzanians that nothing will stop the state from using force to contain those who are out to disrupt peace in our country,” he warned in his monthly address to the nation. The President called on the group to go back to their core business and shun their political agenda, as well as avoid statements that may divide Tanzanians along religious lines,” the President said and added that Tanzanians have always lived like brothers, irrespective of their differences in race, ethnicity, religion and origin. He told the nation that in the past the group’s leaders used to strongly criticize the Revolutionary Government of Zanzibar, however their criticisms became irrelevant after formation of the Government of National Unity towards the end of 2010.Uamsho as it is known in Swahili acronym is the Association for Islamic Mobilization and Propagation which has called for a referendum on Zanzibar’s exit from its union with mainland Tanzania. Surprisingly, the President said, the criticisms resurfaced recently after the union constitutional review process was kick-started. He said this time around they have been harping on the union, uttering abusive words against the union founders and current leaders. However, the president said it was unacceptable for someone with divergent views on the union to exploit the situation to pillage and torch houses of worship, adding that this would never be tolerated. Hardly three weeks ago, hundreds of supporters of a separatist Islamist group set fire to two churches and clashed with police during protests in Zanzibar. Clashes broke out in the historic commercial and tourism centre of the predominantly Muslim island Stone Town. The Indian Ocean archipelago of about 1 million people merged with mainland Tanganyika in 1964 to form the United Republic of Tanzania, but Zanzibar retains its own president and parliament.
Posted by Emmanuel Onyango at 9:45 PM