The government in a move to cut down unnecessary ministerial costs

AS the national budget for the fiscal year 2012/13 is currently in debate at the parliament, higher government authorities from every ministry in the country such as permanent secretaries, directors and chief accountants and many others have been cautioned to avoid unnecessary expenditures in order to ensure accountability on government funds. The call was made recently in Dar es Salaam by the Minister of State in Prime Minister Office, policy, coordination and parliamentary affairs, William Lukuvi when stressing the importance of government’s need in a move to cut down unnecessary costs in all ministries in the country. He said in an interview with the Dar es Salaam based Independent Television (ITV) station during the 45 minutes talk show program which is being prepared by a TV presenter Selemeni Semunyu and aired on every Monday. According to the Minister, the government has effectively started implementing its program of cutting down unnecessary operational costs so that it should be in a position to make its proper development plans, an exercise which he says will take place in every ministry with effect from next 2012/13 financial year. Elaborating on how the government would be implementing its strategic plans, the minister noted that, one way it would reduce unnecessary travels of its high ranking officials and other dignitaries in a bid to control the excessive use of fuel on government vehicles. “This is to implement the order recently issued by the Prime Minister Mizengo Pinda in parliament to stop the purchase of luxurious Japanese cars such as Linux VX Land cruiser and instead, the government will be buying RAV4, Double Cabin or Hard Top types of vehicles which are more cost effective”, he said. . 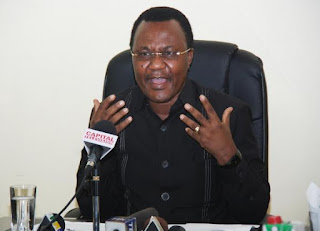 He narrated that the Linux VX model cars are more costly as they are heavy duty vehicles consuming a lot of fuel and spends more in their repairs and maintenance, adding that these would be made available with special order if needed. Apart from that, the minister also noted that the government has limited its participation in some functions such as Nane nane exhibitions and other public functions saying that only the relevant sectors will be participating in these occasions. The Minister clarified that, there are some functions which the government and its agencies are participating but in actual fact the activities at the functions concerns certain particular sectors of development. “As from now henceforth, only the relevant bodies would be participating”, he cautioned and directed ministries accounting officers to observe this without failure. But it’s very unfortunate that, the Minister couldn’t talk about the allowances paid to high ranking government officials and normal civil servants during their seminars and official meetings, if it has been considered as one way of cost cutting measures in the government’s strategic plan. Instead, he has directed them to reduce unnecessary seminars or meetings wherever possible. In line with this, on the use of government vehicles, Lukuvi has directed Permanent Secretaries to use their loaned vehicles and leave government vehicles while going and coming back from their respective working places. However, he said and added that, the same thing should apply to district and municipal directors countrywide. In matters related to work performance, Lukuvi has called on the higher authorities from the district to regional level to physically visit their people in villages to give any special attention to the needy people. He has urged them to be responsible enough to attend and solve their most basic social problems facing them, and work effectively to ensure that the country’s resources are managed properly for the benefits of the people in the country. He added that the government’s expectations is to see its officers works on the laid down strategies and come up with possible ways on how they can reduce such costs in their sectors without waiting for the directives so that they could save the money which could be spent on other development plans. According to an economic expert, Raymond Mwailunga based in Arusha, if the government is not effective to look at its basic expenditures, the country’s spiraling debt is likely to drive the nation into bankruptcy. Mwailunga is on the view of the fact that, the projected Sh. 15 trillion for this year’s fiscal budget is great, but might be too little if the government would not cut down unnecessary expenditures
Posted by Emmanuel Onyango at 1:13 AM