Why internet sometimes fails to deliver

INTERNET has been proved to be a driving force for quick business transactions and it has shown a great success that has been envisaged in many of its operational work. But it sometimes fails to deliver correctly due to its low speed. Have you ever thought of what is likely to be the main cause of poor internet services? Users have had their business transactions stopped or paralyzed due to this, a result of which it renders quick service delivery at the customers’ service points. In a normal circumstances, inside a cyber café around for instance, a lot could be attributed to such shadow experiments either by Internet Service Providers (ISPs), or low bandwidth depending on the level of users’ economic empowerment. The key issue in engendering the level of Internet service delivery is bandwidth deployed by an individual or corporate for Internet access offered by the ISPs. Like in any business setting, bandwidth therefore is important to market when it comes to offering and receiving good Internet service.
The bigger the capacity of bandwidth an operator as ISP or cyber café cum small scale enterprises have medium, the better for them, which means more customers on their network or business centres. Lack of reliable ICT infrastructure in the country, is another problem that drives away the desperate stakeholders as far as poor internet services is concerned.
IT experts also worries on the compelling problems which include poor telephone services. They link the existing problem of the service to poor telephone usage via dial-up connection from which the Internet could not be achieved due to faulty telephone lines. Wherever there is a service to be offered by help of computers that concerns with cash handling such as in the banks, normal cases of internet failure usually occurs, and the weary customers standing on the queue are told to wait for a while as technicians are busy working on the computers to solve the problems.
With the use of internet, most commercial banks in Tanzania are now striving as hard to remain competitive and innovative to cope with the technologically ever changing world, especially in the payment systems in order to make their transaction much quicker.
Likewise in ordinary operating cafes in cities and in towns, high speed internet access is necessary to avoid congestion which sometimes occurs whenever there is low speed of the internet, an aspect that cause desperation to the waiting customers.
But with the newly introduced technology of systematizing quick digital access, the Infinet ADSL is the solution to all these problems. Before the introduction of this high speed internet connections in Tanzania, most web users had to rely on slow dial-up connections. 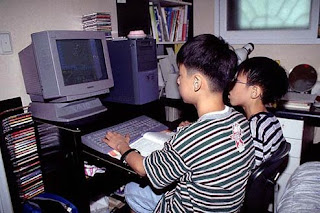 Asymmetric Digital Subscriber Line (ADSL) is an existing digital modern technology that provides high speed internet access over ordinary telephone wires. It permits normal voice telephone conversation and internet data to be transmitted simultaneously over an existing telephone line.
The product which was firstly introduced by the leading ISP in the country, the Africa Online Ltd in March 2006 eliminates common problems experienced during dial-up. With these products which proves high proficiency, they have tailored solution to meet clients’ needs. According to General Manager of the Africa Online (T) Ltd, Mr. Ken Munyi, the product (ADSL) has much faster connectivity with dial-up modems rated at 57 Kbs per second and operate at about 53 Kbs. He says, ADSL has been designed to cater for consumers with low internet or email usage, however, it is operating in a difference frequency and the phones can be used normally even when surfing.
It also caters for small, medium and large business with a wide range of products and services that address the most demanding of needs whether a company requires a single point connectivity solution or a complex multi-point network solution.
Africa Online is a multi-national company operating in more than 16 countries in Africa and has a wide range of products including Broadband Wireless Internet Access (BWIA) whose network has been implemented using alvarion wireless equipment and managed frequencies of 3.5 GHz and 10.5GHz.
Others include Leased Line Internet Access (LLIA) VSAT Internet connectivity, dial-up access, website design and development, website hosting, domain registration and hosting. According to national government ICT policy setup, Tanzanian government is ready to work with companies in ICT to expose more Tanzanians to advanced modern technologies emerging in this era of science and technology.
Posted by Emmanuel Onyango at 5:47 AM